After the Shelley hard fork, Cardano staking became available on the mainnet. ADA holders can delegate the stake associated with their ADA to a stake pool and be rewarded in proportion to the amount of stake delegated. It's a great way to earn a passive income for newbies as well as for experienced ones due to a simple earning system, friendly minimal stake amounts, and high APY's.

Basically, when staking Cardano, you help its network to divide resources and support the stability of the network. This is is an alternative way to verify and secure transactions in the blockchain, it is used to secure networks with minimal energy consumption and setup.

Contrary to other coins, your delegated ADA coins are never frozen. That means your holdings are never taken from you — you can spend your staked balance whenever you want.

On June 29, 2020, the ADA network transformed from a centralized network to a distributed one using the Shelley protocol. This transition mainly permits using more nodes for running the ADA network and is designed for risk reduction. Besides that, the new Cardano network provides delegation and earning options for the community — the more people stake, the more decentralized and secured the network will become. Check the official Cardano website to learn more about this upgrade.

Despite the great progress and many updates that this hard fork brought, part of the community continues to use Cardano Byron. By default, when you create a new wallet in Guarda, it generates only a Shelley address, but we support both formats, which means you can easily add a new Byron address to your wallet or import it from another service. There's no difference in coins, so it is possible to transfer funds from Byron address to Shelley address and earn rewards.

Despite that, there is a difference in addresses. You can easily define what format your ADA address is in by looking at an example:

Please note that staking is only available for Shelley addresses. If you have some coins you want to delegate on a Byron address, transfer them to a Shelley address first. This operation will require a network fee.

The deposit remains in your wallet and is not frozen, so you can send or re-delegate it to another staking pool any time you want.

How to stake ADA in Guarda

Note: you can only stake the entire balance of your wallet.

2. You can select the validator in the "Advanced options" tab and click "Next". The minimum amount is 10 ADA.

3. Now click "Confirm". Done, your ADA is now staked and you will be earning rewards! 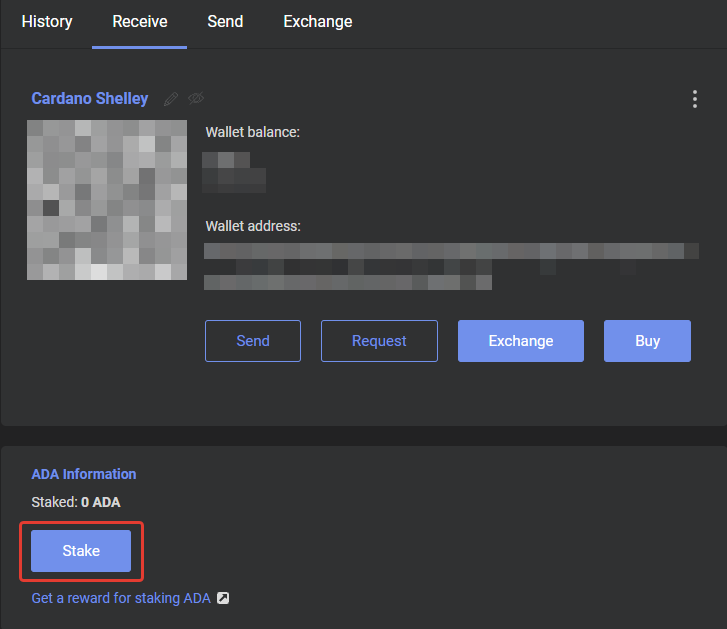 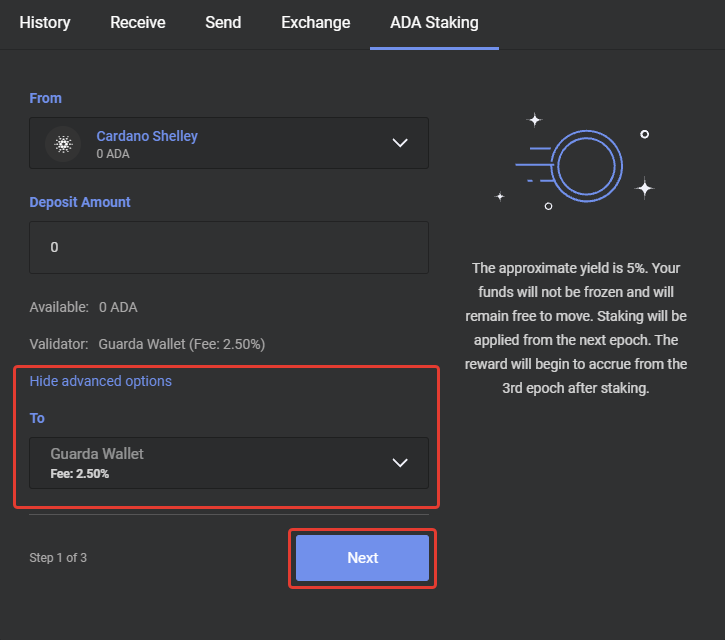 How to claim rewards

The amount of the reward you will receive can be seen in the "Receive" tab or the list on the left by clicking "Staking" in your ADA wallet. Open the wallet and click "Staking" and then "Claim".  The reward is accrued at the end of each epoch, starting from the third epoch after delegation.

Has your question been answered? Thanks for the feedback There was a problem submitting your feedback. Please try again later.